the best advise and products for the magical entertainer

The BEST Egg Bag in the WORLD!

ASK ANYONE WHO OWNS ONE! 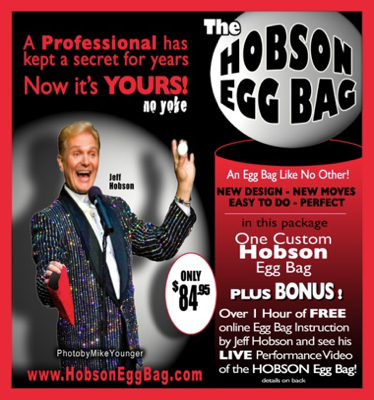 getting something extra special with this Egg Bag set and in some ways you are. Jeff Hobson is one of the world’s most experienced

with this classic prop in order to give you the best chance of creating the perfect egg bag illusion.

So, what are the differences between the JH egg bag and all the

others? Firstly the size. The bag is wider than it is long, which is the

opposite way round from other bags. The reason is so that you can hold the top of the bag with both your hands with the fingers

into the bag in order to pull it inside out. Secondly, the colour. This bag is bright red on the outside, to ensure that it shows up on stage,and black on the inside, as this is the very best colour to mask the bulge of the egg when it is secretly in the internal pocket. Thirdly, the material. Rather than have the bag made of slick thin material, the JH bag is made of a more bulky cloth which is easy to handle but which prevents any tell tale sign of the egg being inside when the bag is supposed to be empty. Fourthly, the secret pocket opening. Although this is cut diagonally across one bottom inside corner, the shape of the cut away is curved rather than straight. Jeff says he feels this makes it easier to get the egg inside and also makes absolutely sure that the egg will always be visible in the bottom of the bag when it falls out. Fifthly, the egg. Is it extremely light and made from a bright white hard resin material. It moves move around well inside the bag as required but because of the very light weight, no movement can be seen through the cloth.

Now on to the routine.  Jeff explains that he wants you to create your own presentation and patter rather than copying his.  He then goes on to run through the handling required for his routine. This is very simple and unlike many other routines, Jeff does not try to overprove that the bag is empty. This shows someone who knows that in a commercial show things need to move on at a reasonable pace and that there is no value in having twelve different ways of showing the bag is empty when two or three will do. His routine is essentially the same set of moves repeated twice. The second time he likes to apparently get the spectator to reproduce the egg from the bag, which gives plenty of opportunity for you to develop lines and gags with the assisting spectator.

Compared to the other egg bags we have reviewed in this

article, this one is the most thorough. It's a well designed bag and a routine which is very commercial provided that you can put enough of your own patter and personality into it. I still feel that the price is rather high and that you are being made to pay perhaps for the fact that Jeff Hobson’s name is on this product . However, if you are serious about putting an egg bag routine into your stand up or stage act, and are prepared to put in the time to create your own presentation, this is probably the one you should invest in.

EXCERTS from The Magic Cafe:

“...You have taken all the flaws out of a regular bag and created the perfect egg bag. God bless you and your influence on the magic community. Thanks for creating the best egg bag in the world.”

“Jeff's Egg Bag is the best in the world, period.  And this is coming from a guy (me)..... who has been performing the egg bag in one form or another for over 50 years as a magician.

You won't find a finer egg bag anywhere....and JEFF HOBSON is the world's best egg bag man, in my opinion...his Online egg bag instructions which include Jeff's tips, suggestions and nuances are GOLDEN....and now they're FREE!”

“I thought I'd drop you a quick line to say that I just received your egg bag and WOW! Having worked with the egg bag for a few years the differences were instantly noticeable. I LOVE the fact that the bag stays open and the fact that up until the very last moment the volunteer can peek into the bag and be completely unaware as to the presence of the egg.

I also enjoyed your thoughts on staging and how to position the assistant etc...very useful stuff. “

“The bag is a work of art. Large mouth for ease in turning the bag inside out. Rounded corners, the clever two tone. It's the best bag I've ever seen.

One reason I never got into performing the egg bag was that you and the audience could see the shape of the egg in the bag. I know guys that have done the bag for 30 years and say "it goes right by them". Well..not all of them.

You can't see the egg once it's hidden in the Hobson Egg Bag. It's invisible to everyone.

The two eggs are BIG. They are perfect for this bag. And no more fear of the egg breaking or using a wooden one. These are light and HUGE!

The instruction from Jeff is as expected, the finest ( and...I believe Jeff's advice and teaching will make folks better magicians/performers )

Why this was released for under $400 I don't know. It can be a showpiece in any performers act.

A world famous performer released his pet routine. This is a MUST HAVE for any serious performer.”

In a world filled with wonderful bags I found the one that is just right for me. The Hobson Egg bag. Just the bag itself is beautiful. This thing handles like a dream.

The egg, oh how I love this egg. It is made out of a HARD resin. You could play hockey with this thing and not break it. It is also HUGE. Compared to other eggs on the market this thing shows up nice and it is so big it gives the illusion that there is no way that this thing wouldn't make a big ol' bump in the bag if it was in there. Best of all, you get two of these bad boys.

The handling. Jeff Hobson's handling is a work of art. Remove all the gags and bits he does and just the physical handling is a masterpiece of subtlety. You do not have to prove the bag is empty because you actually show them that the bag is empty. This allows you to get in, get out, get the check, and go home early. Billy McComb always suggested, "If you buy my stuff, try it my way first. I've beaten the routine in for years before I sold it to you."

Taking Billy's advice, I tried it Hobson's way last night at a corporate walk around gig. That is another thing I never would have done with any other bag and routine I used. I never would have done it close up table to table. Hobson's routine is so straight forward that you can play this thing anywhere. It hit these people like a hammer to the forehead. It's a great routine. There are also spots in the routine that scream, insert shtick here. If you are a comedy worker this thing was designed to be a personality piece. I did not use any of Hobson's lines or gags, I used my own. Let's face it, there are probably more lines out there for the egg bag than any other trick in magic. I ran a search on "egg" and "bag" in my joke file and came up with over 500 hits. Remember, chicken jokes come in there, old bag hokes, I mean really think about it, this is a workers dream if you have the routine that allows it.

No more egg under the arm to muddy up the effect for me, this routine is pure effect that hits them hard and has a lot of places to hang your funny.

This trick is going to be a feature for me, I am so sure of that I came home last night and ordered another set bag, eggs, and all. If you find something that works for you always buy two if you can't afford a dozen.

This prop may be pricey compared to some of the others but it is worth every penny, every penny. “

and the original Red and Green!

Thanks to all of the masters of the egg bag, past and present.  A special thanks to Denny Haney who inspired me to perform it.  Historical notes -Johnny Thompson was the first to put rounded corners on a Malini-style bag and the curved pocket is credited to Charlie Miller.  -jh

Based on design and function, this is the ONLY Egg Bag I can and will ever use! — Gregory Wilson